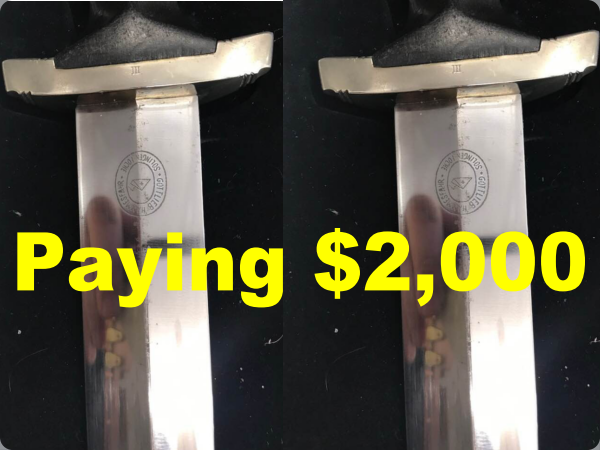 When faced with the daunting task of selling Family treasures or a cherished collection one obvious choice is to contact a local auctioneer . You should be warned that you will only receive 50% of what the buyer pays at auction. Perhaps a better option is to allow us to research the items you propose selling ? By establishing what prices have been achieved for similar items in the past we equal or better recorded prices without your being robbed in unnecessary charges . Here is a great example of what you can expect from us . 100% of the recorded value rather than the 50% Auctioneers provide .. What is in it for us ? That is easy we are high street retailers and museum suppliers .

We have an appetite for fresh goods to be supplied to our growing number of History buyers. Call Today on +447860747027 Or Email davidmatteybuyer@gmail.com

It is mid-afternoon here in France several weeks after D-Day. Shells from heavy artillery are humming overhead and the sounds of shells bursting are coming from all directions in the not-so-far-off distance. The regiment I’m with forms part of the front line.

I entered France on D-Day with the “Fighting First Division.” This Division has well-trained, courageous and experienced men.

Our officers are of the highest order, men of great courage and experience who are war-wise and have seen a lot of battle. The First Division was the first to enter France in World War I and first to enter France in this war; they were the assault troops in the American sector on D-Day. There are not many close-up photographs of the First Division on D-Day because the beach was too hot for photography in those early morning hours and also all through the afternoon. Picture-taking was better in the days that followed.

When my part of the Division landed, there were impressions made on my mind that will never leave it. Just before landing we could see heavy artillery shells bursting all up and down the beach at the water’s edge under well directed fire.

As I stood in line waiting to get off the LCI to a smaller craft to go into shore, I was looking toward land and saw a large shell fall right on a landing craft full of men. I had been praying quite a bit through the night as we approached the French coast but now I began praying more earnestly than ever. Danger was everywhere; death was not far off.

I knew that God alone is the maker and preserver of life, who loves to hear and answer prayer. We finally landed and our assault craft was miraculously spared, for we landed with no shells hitting our boat.

Ernie Pyle came ashore the morning after the assault and after seeing the results of what took place the day before he wrote in his article for the Stars and Strip“Now that it’s all over, it seems to me a pure miracle we ever took the beach at all.”

The enemy had a long time to fix up the beach. The beach was covered with large pebbles to prevent tank movements, and mines were everywhere. The enemy was well dug in and had set up well prepared positions for machine guns and had well chosen places for sniping. Everything was to their advantage and to our disadvantage, except one thing, the righteous cause for which we are fighting – liberation and freedom. For the moment our advantage was in the abstract and theirs was in the concrete. The beach was spotted with dead and wounded men.

I passed one man whose foot had been blown completely off. Another soldier lying close by was suffering from several injuries; his foot was ripped and distorted until it didn’t look much like a foot. Another I passed was lying very still, flat on his back, covered in blood. Bodies of injured men all around. Sad and horrible sights were plentiful.

In a recent write-up it is said of one of the colonels of the First Division that led his regiment in on the beach during the early morning, “This blue-eyed soldier had stood on the beach where thousands of men were pinned down by enemy fire, and in a quiet drawl said, ‘Gentlemen, we are being killed here on the beaches; let’s move inland and be killed there.’”

In from the beach were high hills which we had to climb. We crawled most of the way up. As we filed by those awful scenes going up the hill and moving inland, I prayed hard for those suffering men, scattered here and there and seemingly everywhere.

We filed over the hill as shells were falling on the beach back of us, meaning death for others who were still coming in. Later, one of the soldiers told me that on this occasion he saw a shell land right on top of a wounded man and blow him to bits. Before going over the top of the hill we crouched for awhile close to the ground just below the top. While lying there I did most of my praying. The shells were falling all around and how I knew that God alone was able to keep them away from us. I shall never forget those moments. I am sure that during that time I was drawn very close to God.

Later, about ten of us were crossing along the edge of a field when we heard sniper bullets whiz by. We all fell to the ground. As we lay there hugging the earth, that we might escape shrapnel from shell fire and bullets from sniper’s guns, the birds were singing beautifully in the trees close by. As I lay there listening I thought of the awfulness of it all; the birds were singing and we Human Beings were trying to kill each other.

We are the greatest of God’s creation, made in the image of God, and here human blood was being spilt everywhere. About three minutes later and only about forty yards away we filed by one of our own boys lying by the side of the hedge, crouched over with a hole in the back of his head. His eyes were open but he was dead, hit by a sniper. We didn’t have time to stop, we were pushing on inland making a new front as we went. Someone behind and hours later would move him.

On the afternoon of the second day we were quite a way inland and two of my assistants and I were out trying to locate bodies of dead soldiers. We always take care of the American dead first and then the enemy dead. This was the second day and we were still fighting our way ;inland, moving fast. Since we did not have any vehicles yet to send bodies back, all we could do on the move was to put the bodies in mattress covers and leave them in a marked place to be taken care of later by the rear echelons. Our business was to keep fighting on inland and pushing the enemy back. On the roadside my assistants and I saw a dead German officer. He was a tall fellow; must have been about six feet four. We turned him over and stretched him out the best we could. I looked at his face and was surprised to see how young he looked. No doubt he was in his twenties but he had the face of a boy. I thought: surely, this fellow was too young to die. It almost seemed that he had asked for it. I became conscious of an awful evil force behind it all to cause a young fellow like this to seemingly hunger and delight to kill and be killed. We slid his body into a mattress cover and left him by the side of the road.

Most of this section of France we are moving through is farming area with fields and hedges and orchards. We see cows and chickens and ducks and pigs and all that goes with farming.

On one occasion we were near some farm houses and some large shells began to fall, so several of us near a stone barn dashed into it to get out of the way of shrapnel. Just inside was a mother hen covering her little chicks. When we hurried in she became frightened and fluffing her feathers rose up to protect her young. I looked at her and silently said, “No, mother hen, we are not trying to hurt you and your little family, we are trying to hurt each other.”

Nobody can love God better than when he is looking death square in the face and talks to God and then sees God come to the rescue. As I look back through hectic days just gone by to that hellish beach I agree with Ernie Pyle, that it was a pure miracle we even took the beach at all.” Yes, there were a lot of miracles on the beach that day. God was on the beach D-Day; I know He was because I was talking with Him.

While in England Chaplain Burkhalter wrote his wife that he had visited many places of interest in his days off duty and among them, he was exceptionally happy to have the privilege of visiting the Baptist Headquarters in London and had a nice little visit with ‘dear Dr. Rushbrooke,” President of the Baptist World Alliance. He said that “Dr. Rushbrooke is such a humble and Godly man and that you could just see the Lord in his face.”

Since his equipment has arrived, Chaplain Burkhalter has a jeep and a trailer, a square box with canvass covering, in which he carries his organ, desk, typewriter, song books, bed roll, etc. He has a clerk and four assistants working with him. He has held field services out under the trees in France, and the Lord has been very real as they felt His presence there. Chaplain Burkhalter is the proud father of a baby daughter, Mabel Jean, born March 21, after he went overseas. Mrs. Burkhalter is living with her mother in Crawfordsville, Indiana.