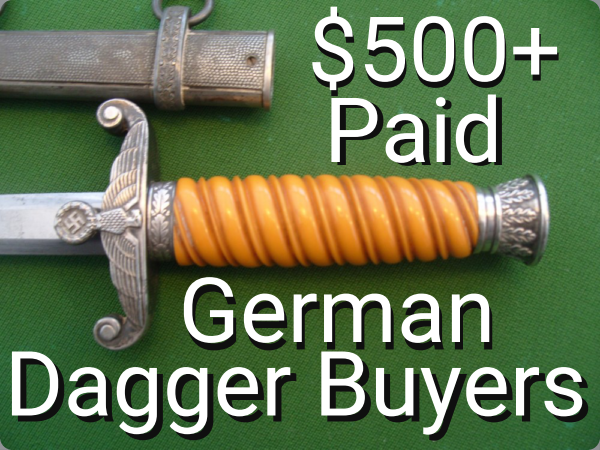 German Dagger buyers.com is the only specialist site dedicated to buying German Daggers .

We do not sell blades on line. Our customers include Museums in Europe , Ethical City investment groups and mature collectors.

The daggers and souvenirs bought home after WW2 are still surfacing , When we started our online German Dagger buying site we were contacted by veterans who had served in Europe and Africa .

Today we provide our services to the sons, daughters and grand children of the Second world war veterans. During the Third Reich period any public servants and all officers in the services carried daggers and bayonets to denote status or rank .

Germany’s air force the Luftwaffe carried primarily two patterns of dagger . The “Heer” or Army officers carried a dagger as did the Navy or Kriegsmarine . Members of the Hitler Youth carried a small knife .

.However the most frequently encountered Dagger is the S.A. Daggers … Other Scarcer daggers include that of the Diplomats ,The RLB , Customs , TENO, DLV, and perhaps a further dozen organisations .

The primary souvenir of choice for any returning serviceman was a German Dagger. German Dagger Buyers pay up front , in advance using the Paypal service. For customers within range of our store direct bank transfer or cash is available upon receipt of your items

. Our belief is that we have always made good offers because many dealers sell directly to us rather than trying to find buyers themselves ..