A Total Ban On The Sale Of Nazi Memorabilia? 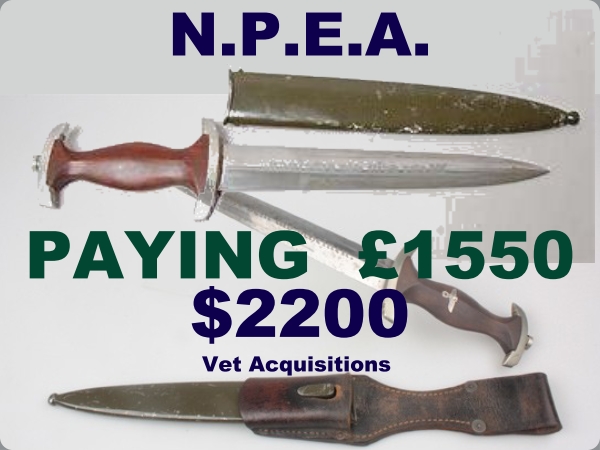 The collecting of Nazi or Third Reich memorabilia has always been considered fairly distasteful. But now for much of the new  generation the very thought of owning anything connected with the NAZI’s is unthinkable and likely to cause an angry reaction.

At germandaggerbuyers.com we pride ourselves on servicing the academic collecting community.  Museums ,Ethical investment groups and advanced mature collectors account for all or our clientele . Sellers who have sold to us can rest assured that they have made the correct choice. We are not part of the dark trade supplying far right political groups.

David Mattey of German Dagger buyers found himself trading WW2 artefacts as a schoolboy . A good proportion of movies made during the 1960s and 1970s were WW2 themed, as were television documentaries. Interest in the epic battles of his Father’s generation led to David’s fascination with WW2 .

The connection between a U-Boat clock and the holocaust might be tenuous but in the eyes of auction houses Nazi memorabilia is Nazi memorabilia .. At German Dagger buyers we attempt to provide the best service for those wishing to sell a single German dagger or a life times collection .. We do not support the ideology of National Socialism in fact our personal politics are quite liberal.

More than ever we are careful about the public display of anything which might cause offence or trigger anxiety .. Visitors to our High street store might not even guess what our primary business is .. So having told you that we are the good guys in a dark industry what can we offer you in terms of service? www.germandaggerbuyers.com is the original internet buying only website . All or transactions are confidential . Our offers have to be spot on for us to retain an unblemished reputation .

If you call us and require a valuation or simply some advice our time and knowledge is offered free of charge . Our main customers include Museums , Advanced collectors ,and one ethical London based investment group. We do not and have never sold to the impressionable .

Where pictures and paperwork accompany an artefact we will ask your permission to display these items together .. The value or items with provenance is greatly increased in many cases .If you have a collection of badges picked up by a named GI or serviceman accompanied by his picture and medals this is like gold for a museum.