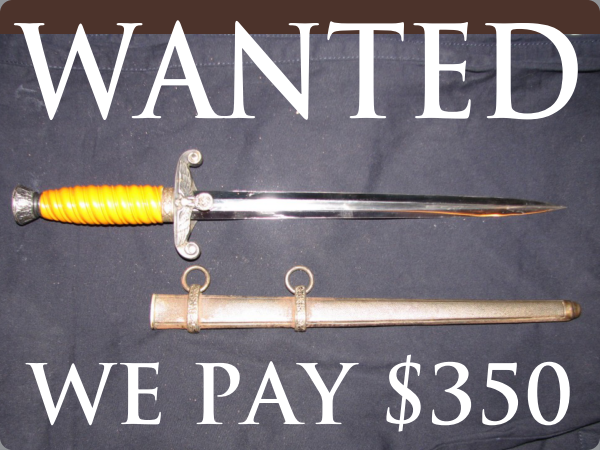 If you have acquired via inheritance a Nazi period Dagger we are always happy to provide a valuation arrived at using a scientific approach .

Firstly when shown images a dagger for appraisal we make observations about the artefact’s condition .

The value of any Third Reich dagger can be assessed  primarily from the condition of the blade ,scarcity of manufacturer and model . The SA dagger and Hitler youth Knife were the first bladed weapons to be expressly commissioned during Hitler’s time of leadership.

The 1933 pattern SA dagger’s were almost entirely produced in the city of Solingen . Various workshops and manufacturers were tasked with fore filling the massive orders . Makers such as Ernst Pack & Son together with those of  Carl Eickhorn and Weyersberg Kirshbaume & co produced thousands of blades .

Hundreds of “cottage industry” makers with a heritage going back generations made small batches of high quality daggers. The Police bayonets of the Wiemar republic period were shortened ,modernised for the carefully crafted image of Hitler’s  1,000 year Reich.

Hitler’s elite guard , SS (Shutze Staffel ) carried a black dagger v identical in design to that carried by the Storm Troupers save for the colour ,blade inscription, and an alternative logo in the grip .